Lifewater Canada donor Geoff Koontz from Ontario spent two days visiting Lifewater projects in Kenya before the start of the COVID-19 pandemic restricted foreign travel to the region. Here is his report:

The first day started by meeting a group of 10 women who had come together to form a group called "Women of Faith."  Even though they live close to the large town of Nakuru, they had to walk 20 minutes back and forth to a river to get water multiple times each day.

They tried collecting rainwater in small barrels, but it was not enough and it would last only for a few days. So Lifewater gave each woman and her family a large 5,000-litre water storage container for rainwater. Now they have safe rainwater for drinking for almost the entire year.

During the dry season, people still must occasionally get drinking water from the river, but it is not common because it rains so often in this area.  And they still use river water for some basic cleaning because there is not always enough rainwater.

People drawing murky water from the river. They point their buckets downstream to minimize the amount of surface sludge they inevitably scoop up. 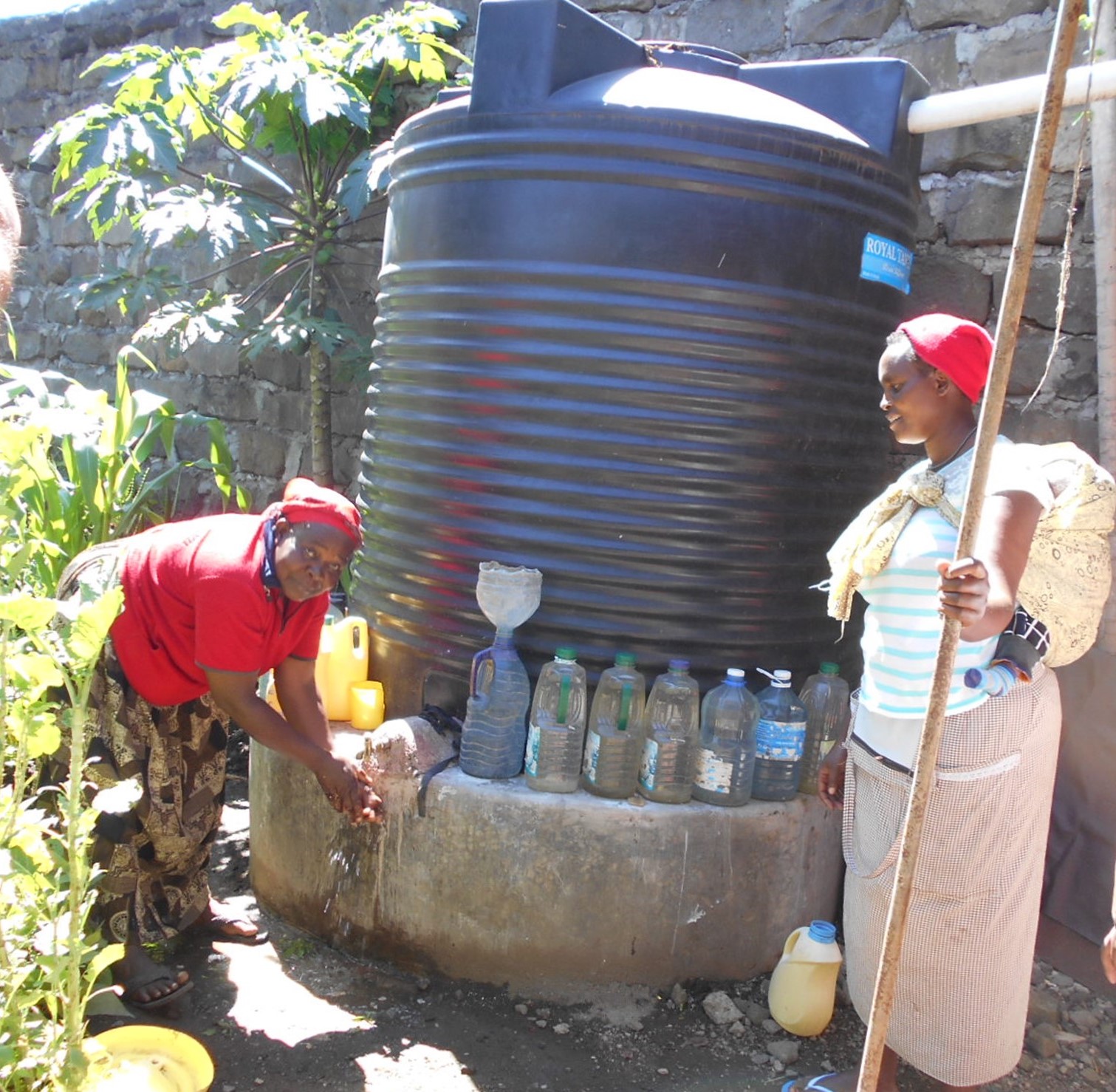 Women in front of one of the storage containers they received from Lifewater. Because the tank is right next to their house, they no longer need to use large, heavy buckets for transport. At the top right is the white pipe that brings the rainwater down from the roof. 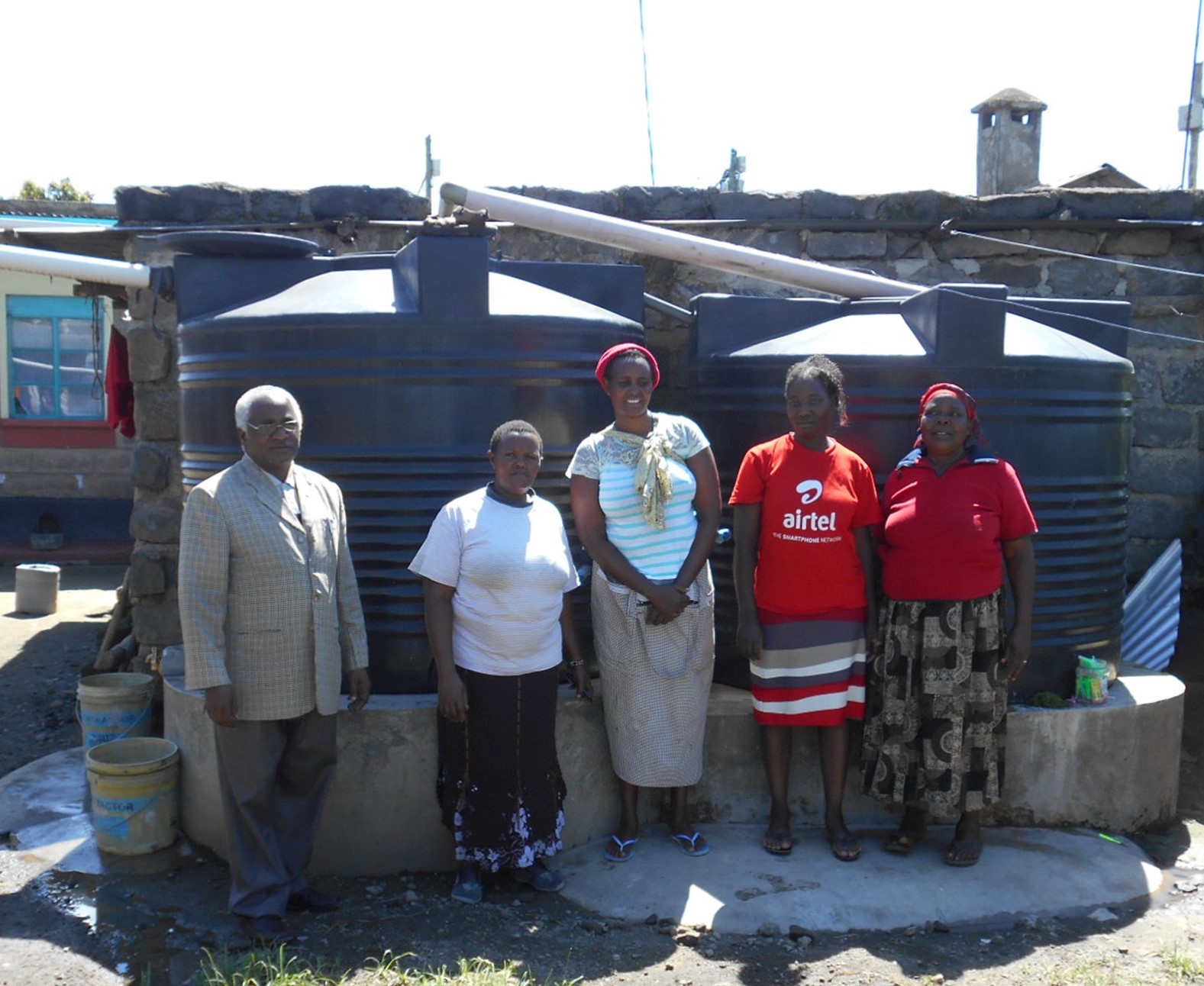 One of the women received a water storage container which she used for her family and her guest house.  It has worked so well for her that she has saved funds from the guests to buy a second tank! With her in this photo are some friends plus Pastor David Laina (far left), Lifewater’s Program Director in Kenya.

Next, we visited several schools that have received support from Lifewater. This one (below) now has its own catchment and storage system for rainwater. 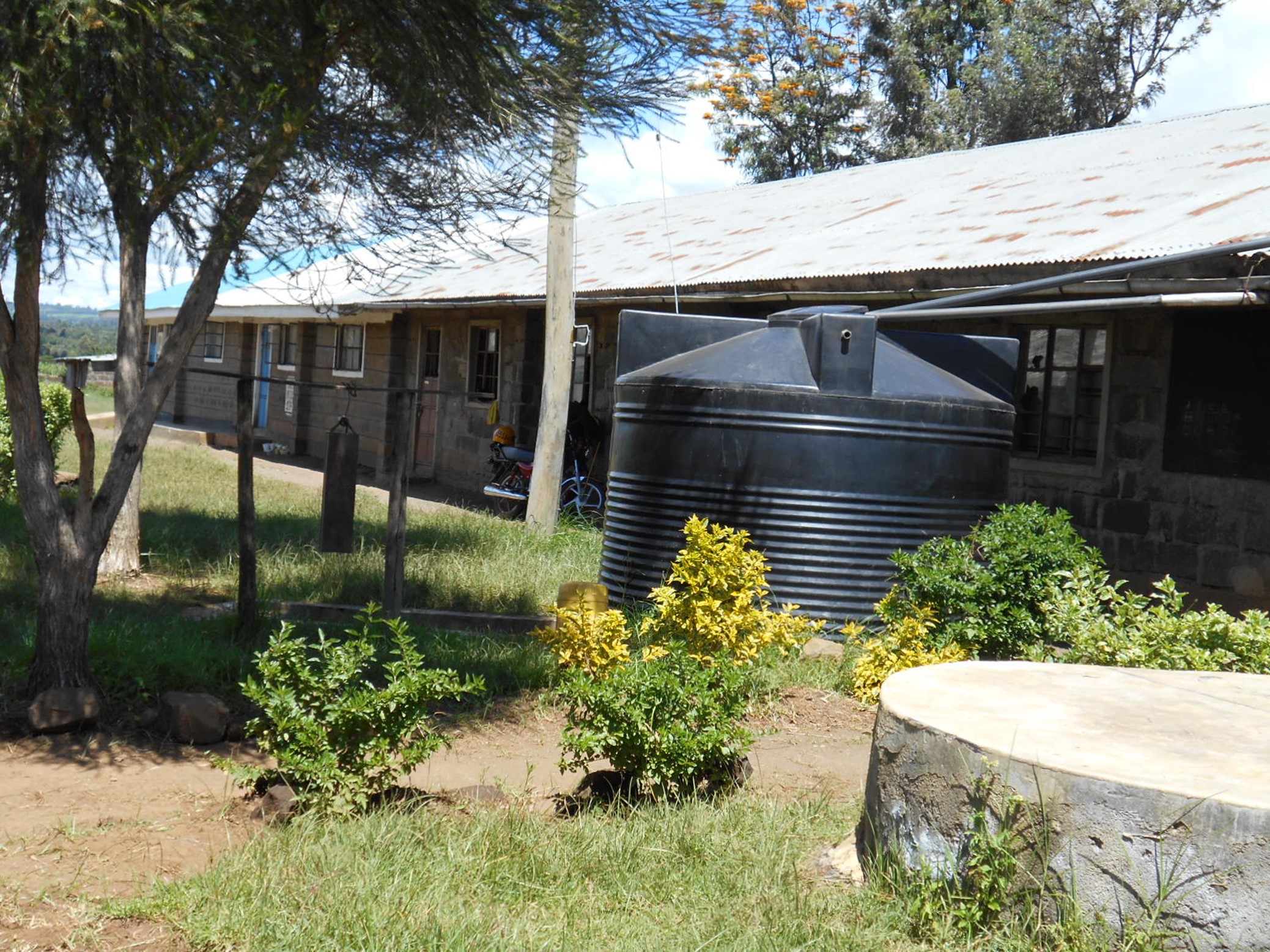 Another school had old, broken-down toilets that Lifewater replaced (below).

While we were at the school, they said that there was a church across the road that had received Lifewater support a number of years ago, so we walked over to see it. 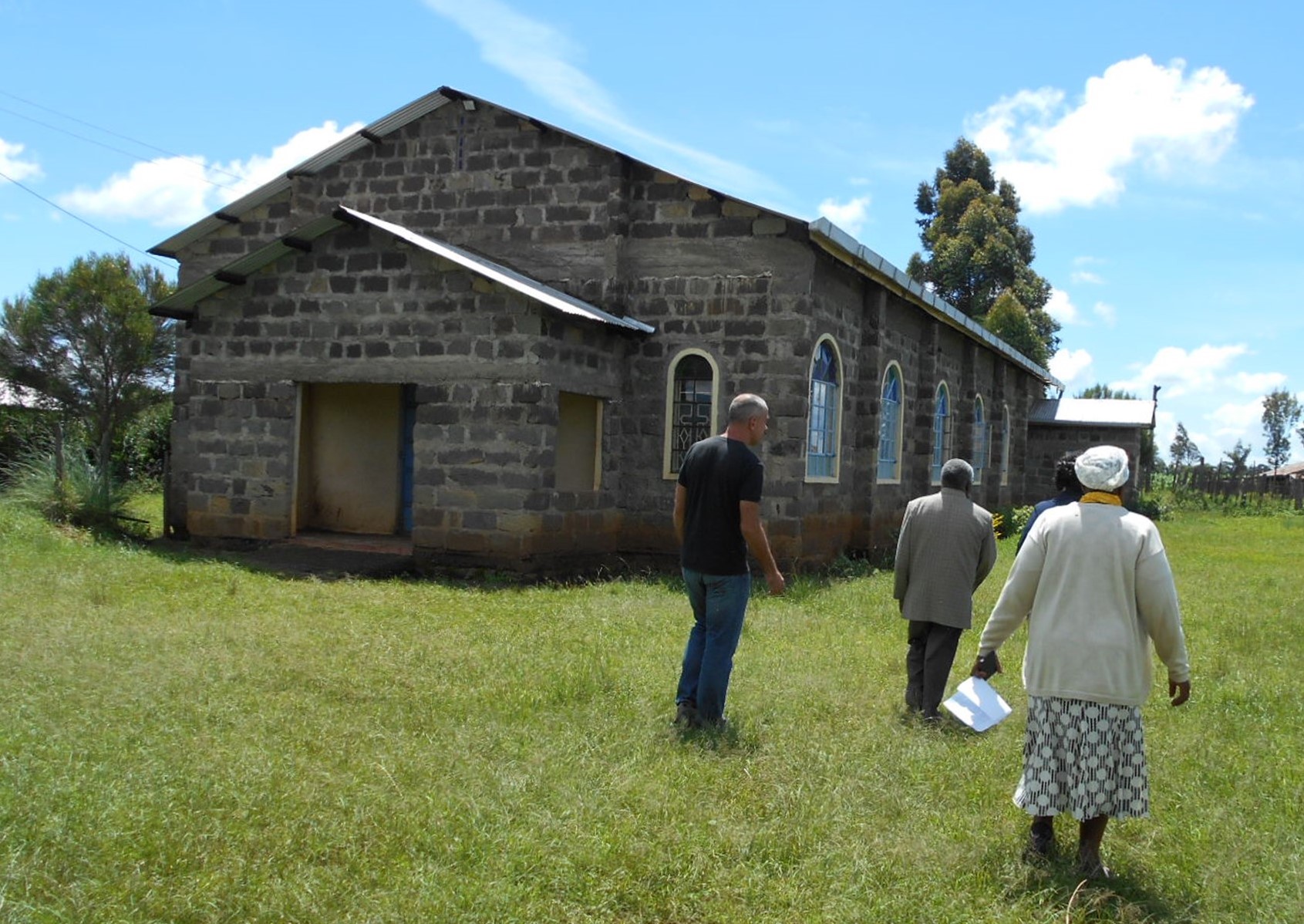 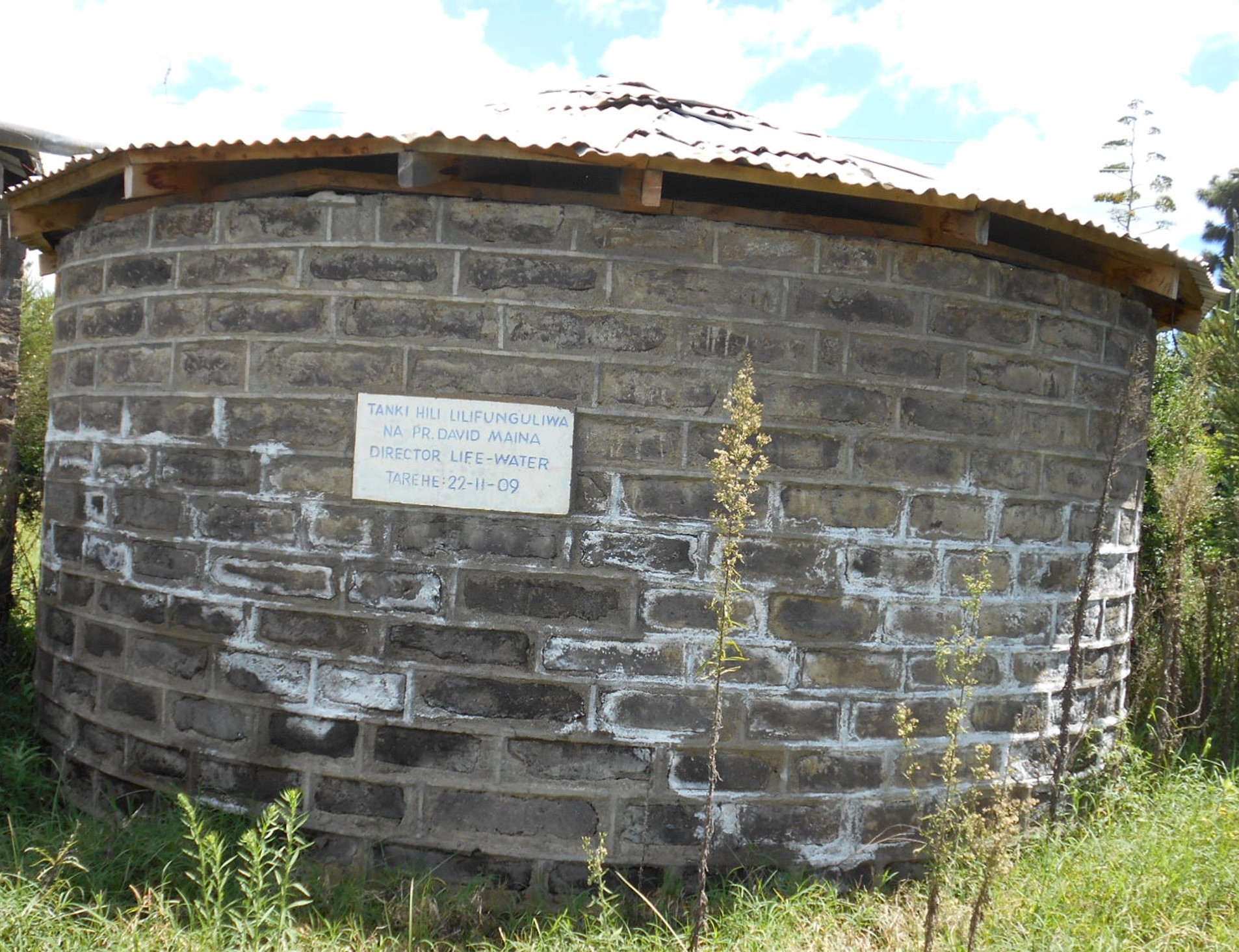 Behind the church was a rainwater catchment system (above) built by Lifewater in 2009 that is still functioning well. Hurray for long-term sustainability!

We also stopped at a small 16-bed hospital (plus 130 outpatients per day) that uses a well for water. Because the well has some contamination, Lifewater provided a large water storage tank and piping system so the hospital can rely on rainwater. The rainwater is generally clean and much safer for the patients and staff to drink.

The front of the hospital, and around the back where Lifewater has installed two rainwater storage tanks, including this extra-large 10,000-litre version, the bottom half of which is buried underground.

The next place we visited is a community that, with Lifewater’s help, has established a large water distribution system. Water is pumped up a hillside to a large storage tank from which it drains down through a piping network to 160 households and more than 3,000 people. When the pump broke a few months ago, Lifewater replaced it. 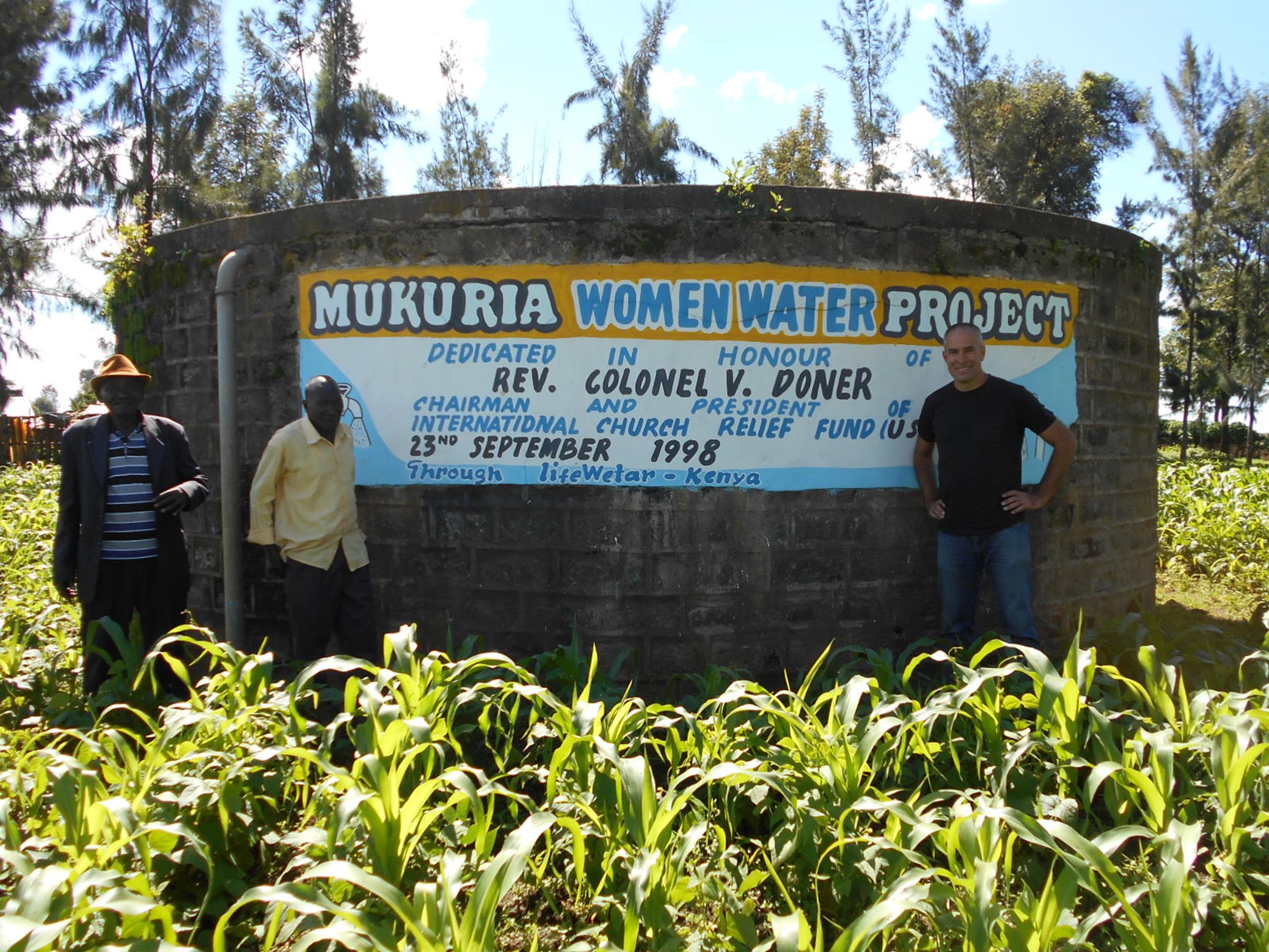 On the second day, we visited several more schools where Lifewater has rehabilitated wells and repaired or replaced hand pumps originally installed by other organizations no longer available to maintain them. 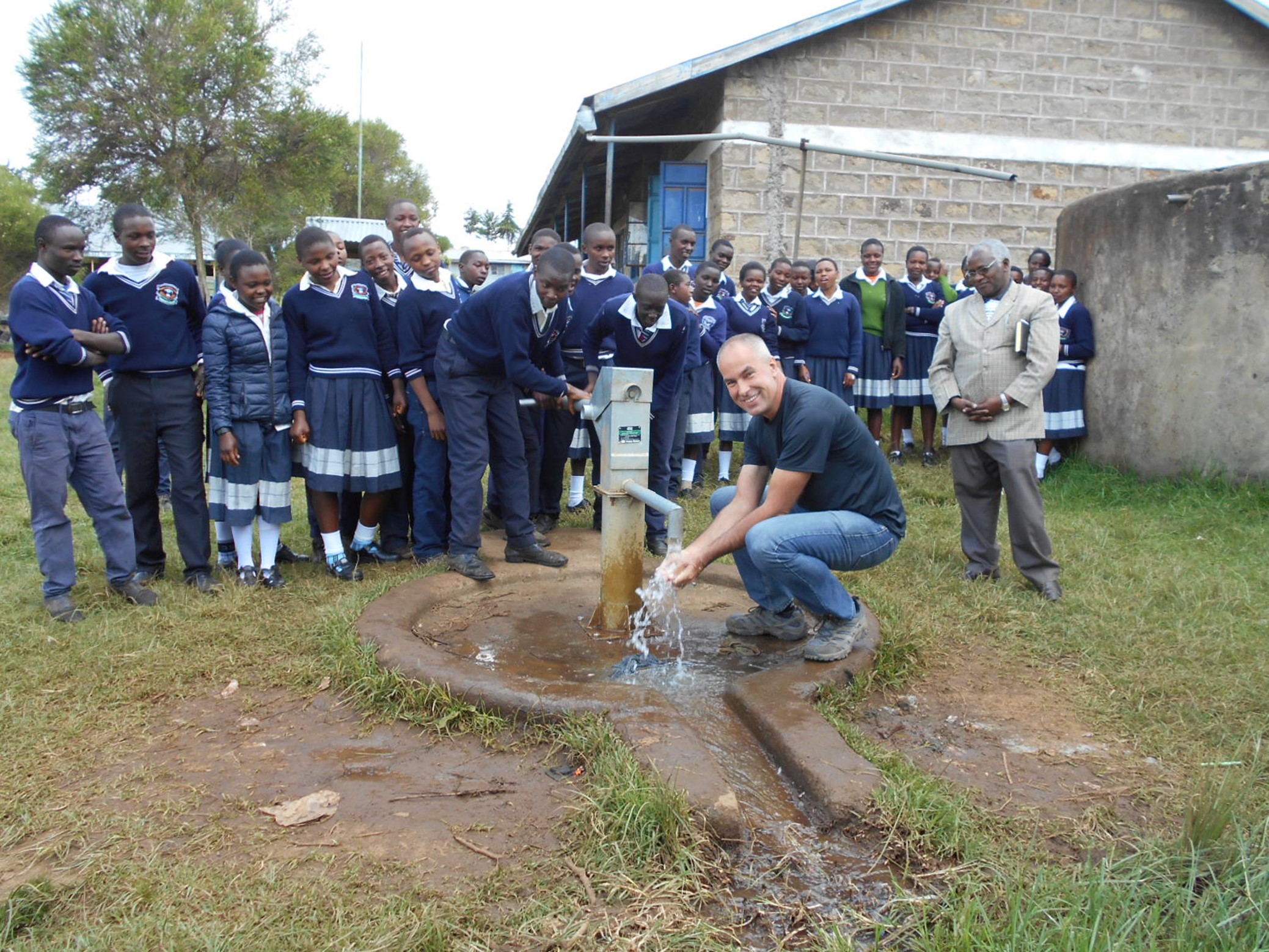 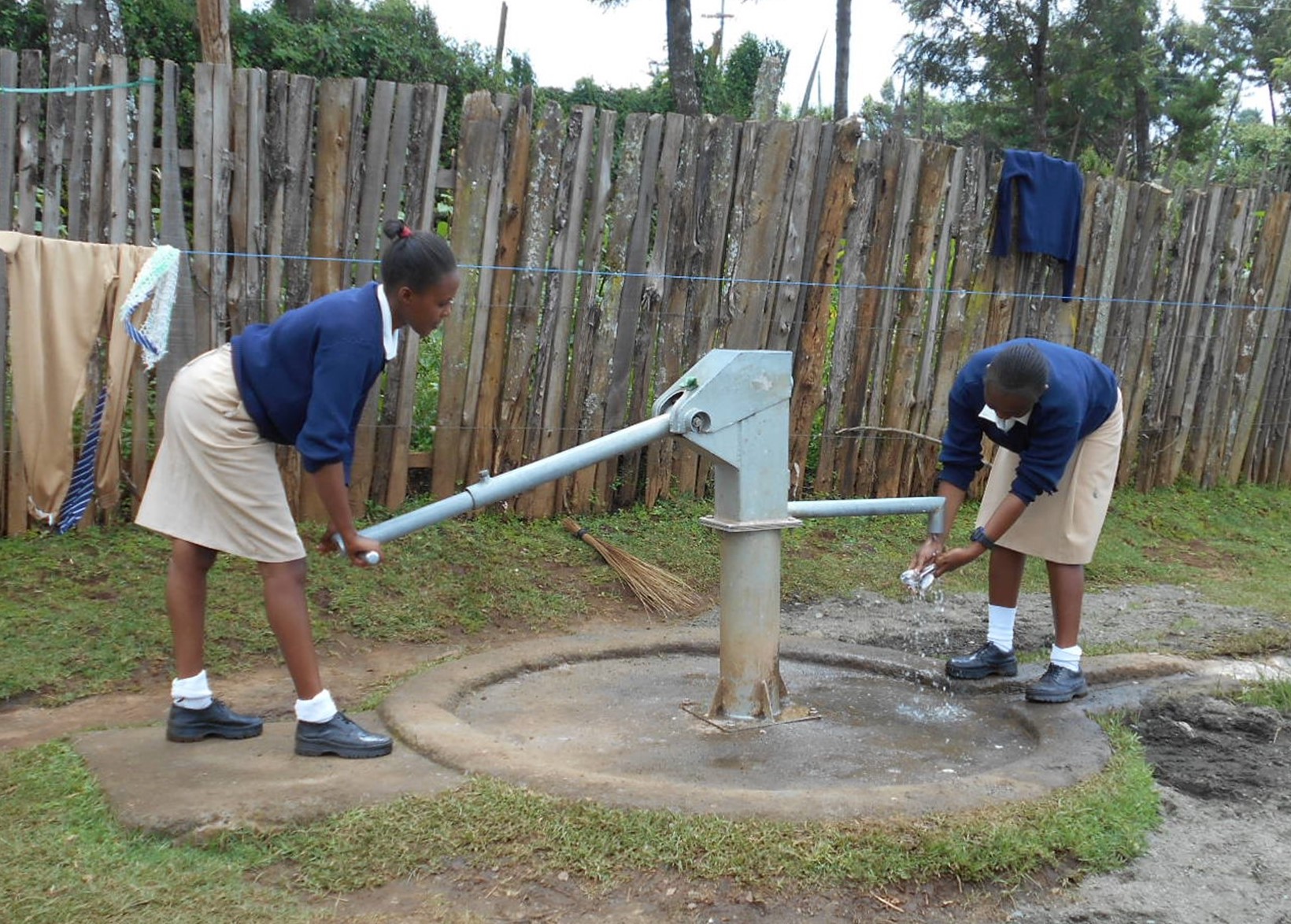 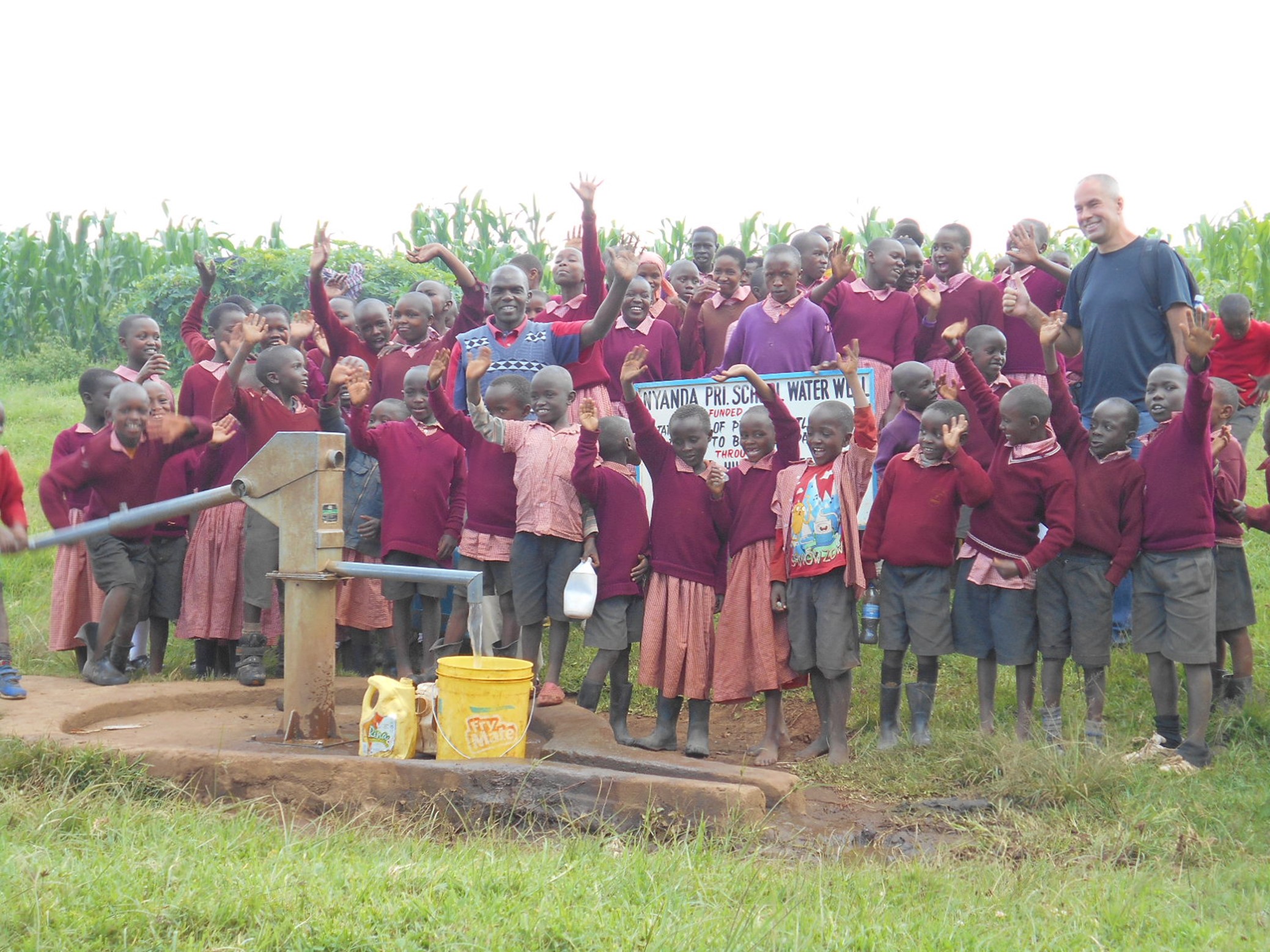 We also visited an orphanage, led by a husband-and-wife team, where Lifewater drilled a well that's providing water for the couple and all the children, and for the orphanage's farm animals, crops, and a nearby school. 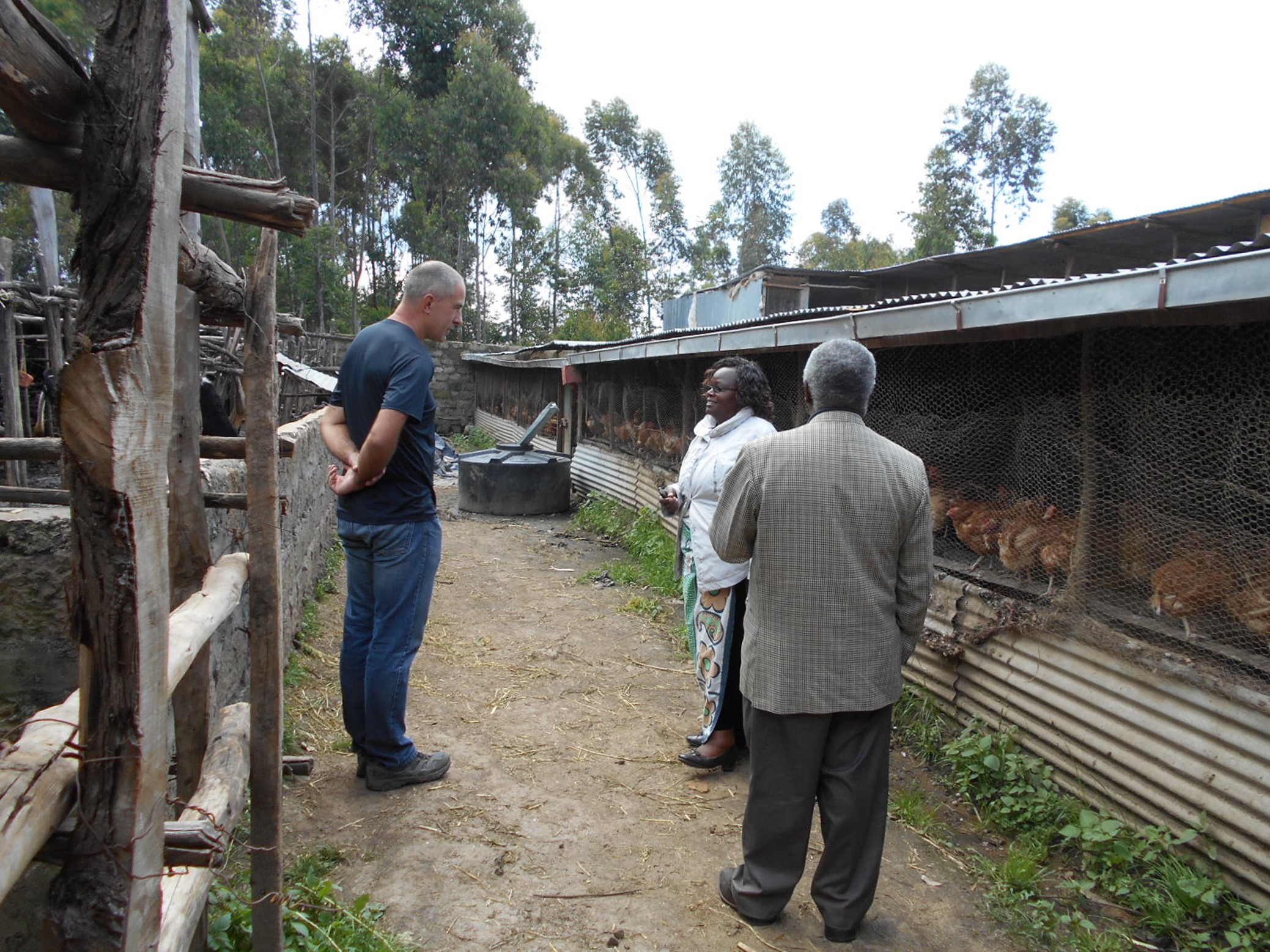 These photos give an overview of what I saw during my time with Lifewater in Kenya. There are many good things happening there, and it was good to see the work of Lifewater after supporting them over the past years.  Thanks to Pastor David for hosting and I pray that the good work will continue!