One of Lifewater Canada’s guiding principles as a Christian organization is that everyone on the planet has the right to safe water, regardless of their religion, race, or other factors.

We had an opportunity to live that out recently when Lifewater returned to where we drilled a well several years earlier – in front of a Muslim mosque.

People in the Nigerian village of Angwa Dodo told us their well pump was broken. We learned thieves had stolen some of the pump parts, leaving the entire community “in total dependence on commercial water sellers,” says Hosea Apeh who leads Lifewater’s drilling and repair team in Nigeria.

Hosea noted that the money the villagers were forced to spend on buying water while their pump was broken was badly needed for food, medicine, and other essentials.

Lifewater’s donors enabled a repair team to arrive in Angwa Dodo with the parts and know-how to soon have safe water flowing again from the abandoned well. 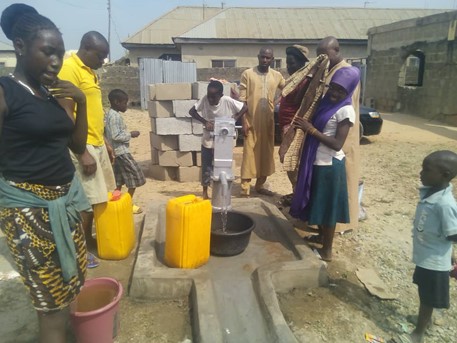 While the repair work was underway, Hosea says, “the joy on the face of the head of the mosque, and the comments people made as they saw us working, was a testament to this well – that it had been a great blessing while it worked and promised to be a future blessing as a result of our rehabilitation.”

Drilling the original well, then returning years later to repair it, gave Lifewater “the opportunity to show love,” Hosea adds. “It was done for humanity and not based on religious beliefs. It was surprising for a Christian group to act in support of what they thought was an Islamic cause.

"But we were guided by the scriptures that say: ‘While were yet sinners, Christ died for us.’ Christ never waited for us to do the right thing before He paid the supreme price.”