Rationale: It makes no sense to be drilling new wells at the same rate that wells are breaking down and not being unused. But hand pumps failing and not being repaired continues to be one of the world’s greatest development failures.

Target 1: Strive for more than one community water source (2 Points)

When villagers get a well providing safe water, it meets their immediate short-term needs. However, the pumps that bring the well water to the surface have parts that wear, and when a pump stops working, the community instantly looses its access to safe drinking water.

This is why it is important for every community, regardless of its size, to have access to more than one water source for when one source becomes unavailable. Ideally, it would be two or more drilled wells with handpumps, but it could even be a dug well with the water being boiled while the hand pump on the other well is being repaired.

In Liberia, there are four communities in Margibi Country -- two on each side of the Marshall Highway. Each community used to have about 500 residents. Lifewater helped provide safe drinking water in this area by drilling one well in each of the four communities. All the wells were located within a two-kilometer radius of each other. 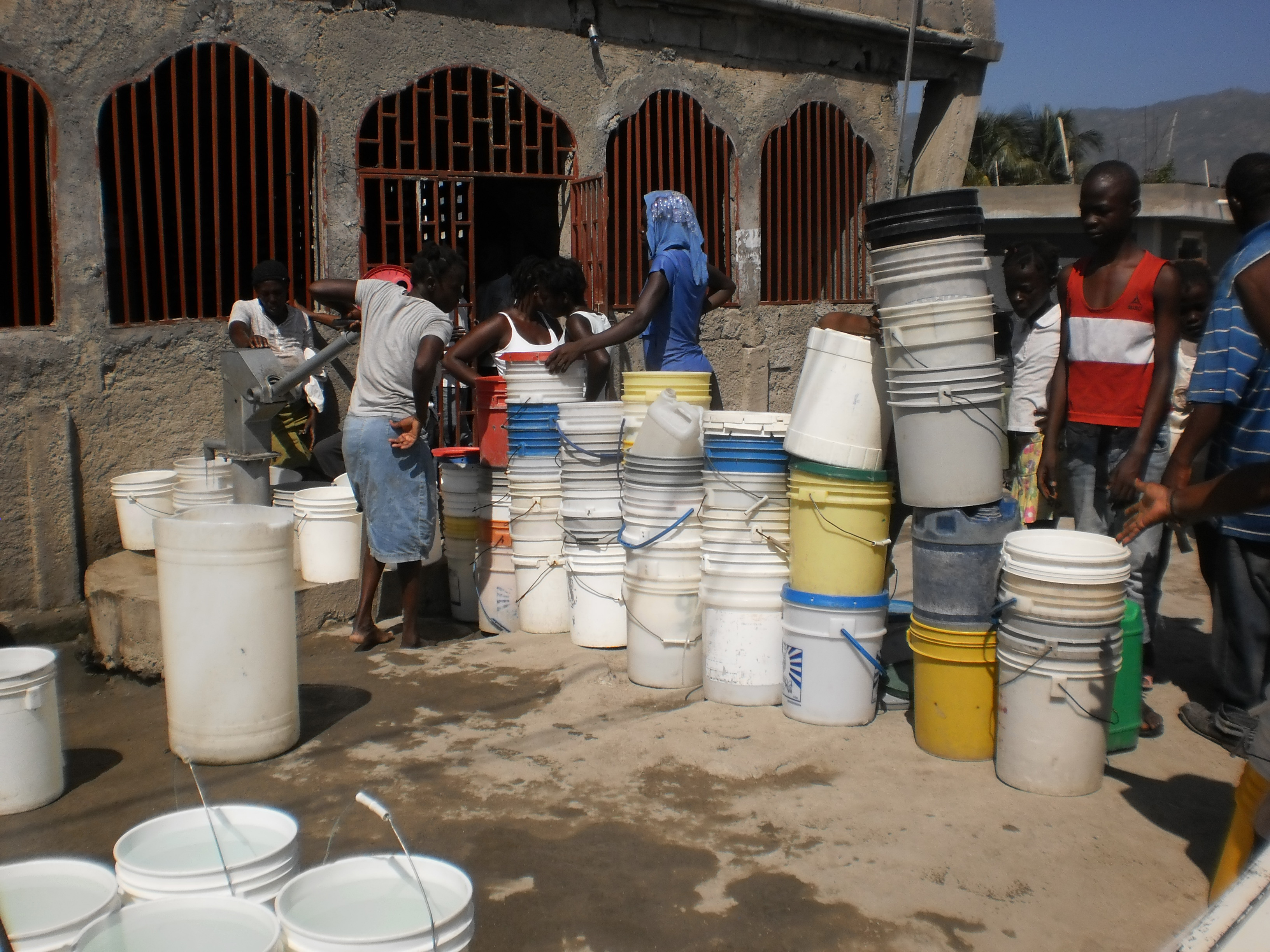 In 2009, the pump in one of the villages broke down. The villagers simply went across the highway and used that community's well. The broken pump was not fixed. Within a few months, the load of 1,000 people drawing from the adjacent village's well caused it to prematurely break down as well.

These 1,000 people then all walked down the road to village #3 to draw water from their well. Having 1,500 people pumping from the one well was far too many, and that pump soon broke down. All these people then went to the last pump in the area. There were non-stop line-ups and this pump quickly wore out from the overuse.

One community failing to fix its broken pump started a chain reaction that quickly led to the entire area losing its access to safe drinking water. Lifewater named this phenomenon “Cascading Pump Failure.”

With no functioning pumps, all 2,000 residents of the four communities reverted to fetching drinking water from stagnant swamps. This continued for several months until a Lifewater team was finally alerted to the situation. All the pumps required simple repairs which were completed in a day for just $100!

Cascading pump failure will not occur if a community has a maintenance plan in place, takes immediate action to repair a broken pump, and has an alternate source of water to draw from while their primary pump is being repaired.

The adjacent towns could have protected their supply by having a trained Well Caretaker, by locking the pump after their water had been drawn to guard against overuse, and by having their Well Caretaker help the first community to fix its broken pump before others started failing.

Before a project is started, a community should buy into the idea that they are responsible for maintaining the pump. They should have a maintenance plan in place so everyone knows exactly what to do when their pump breaks to get it back in service as soon as possible. Besides the “No Plan” option, there are three types of maintenance options:

We started training Pump Repair Technicians in Liberia in 1995. However, lack of repetitive experience and of spare parts often led these technicians to simply call the Lifewater office to send a repair crew, rather than trying to do the work themselves.

In 2005, some Lifewater volunteers, dressed in their Sunday best, were walking down the Bensenville Highway to a church service. They were flagged down by some women who said their pump had broken down the day before and they needed to get water for their families.

By pumping the handle, the Lifewater volunteers realized the problem was not serious and could be solved without extra parts. 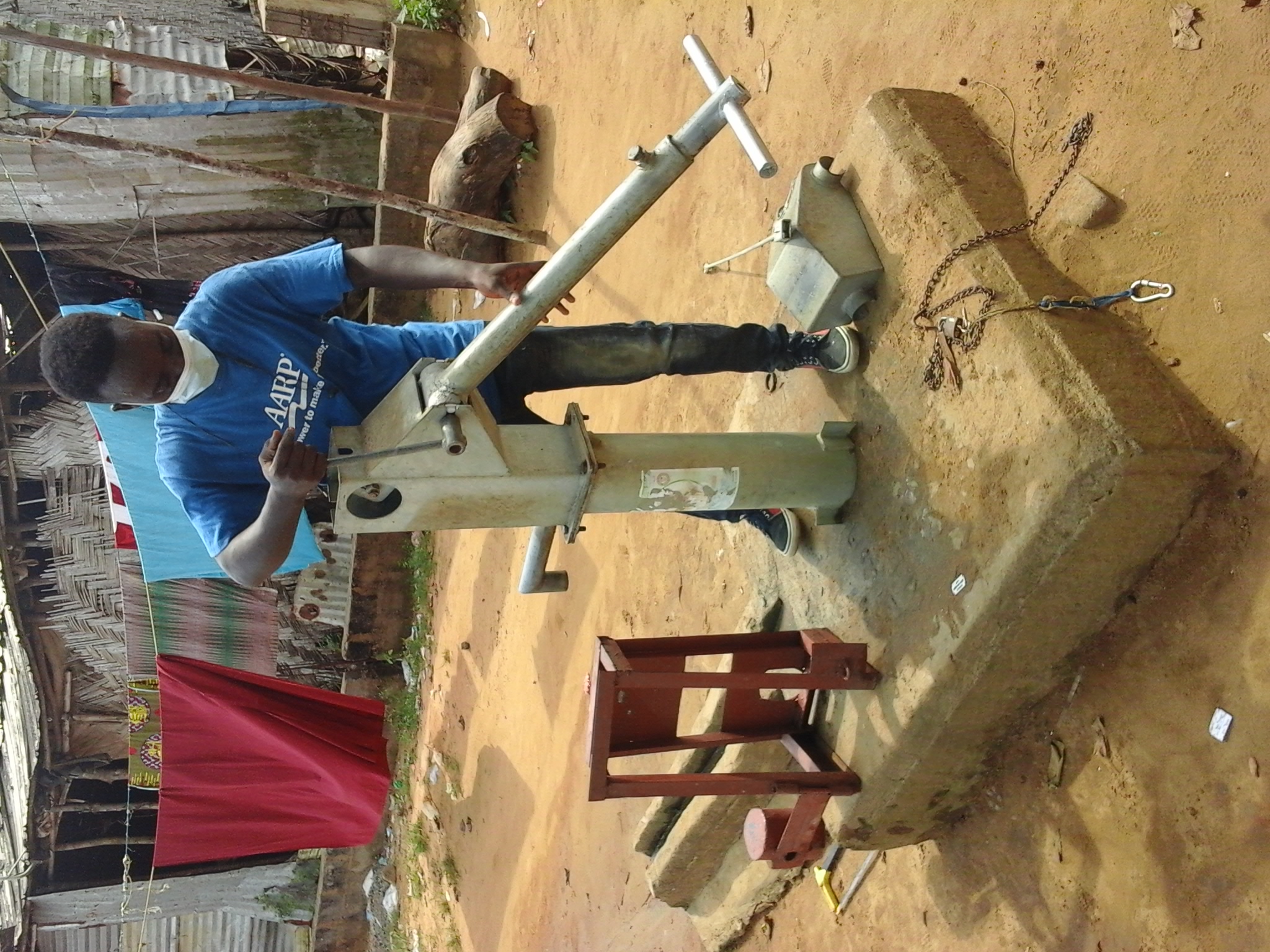 They asked if the two pump repair tools that had been provided with the pump were still in the village. A man named David soon arrived with them. He'd received Pump Repair Technician training but could no longer remember much from it.

The Lifewater volunteers offered to talk David through the repair process. He agreed but started his work very tentatively. The volunteers had him take one part off the pump, then put it back on; then take it off again while also taking off a second part, then putting them both back on; then taking three parts and putting them back on . . . with each repetition David became faster. By the time he got down to the problem, he was working confidently.

When the pump was put back together, the local women pumped the handle and fresh cool water poured out! The women went wild, hugging and cheering David like he was the town superhero! He had an ear-to-ear grin!

No one even heard or responded to the Lifewater volunteers as they said farewell and headed off to church -- leaving the superhero chatting with the excited women as they filled their buckets! And the seed for the idea of "guided pump repair" was planted.

Most Lifewater Canada wells are completed using Afridev handpumps. Afridev is short for “AFRIcan DEVelopment”. Because they are public domain pumps made in a number of countries, the supply is much more reliable than any private company's pump.

Afridev handpumps are designed for Village Level Operation and Maintenance (VLOM). This is done by reducing the number of needed tools to a specialty foot valve puller, two open box wrenches and a lug wrench (like that used to tighten the nuts on car wheels). 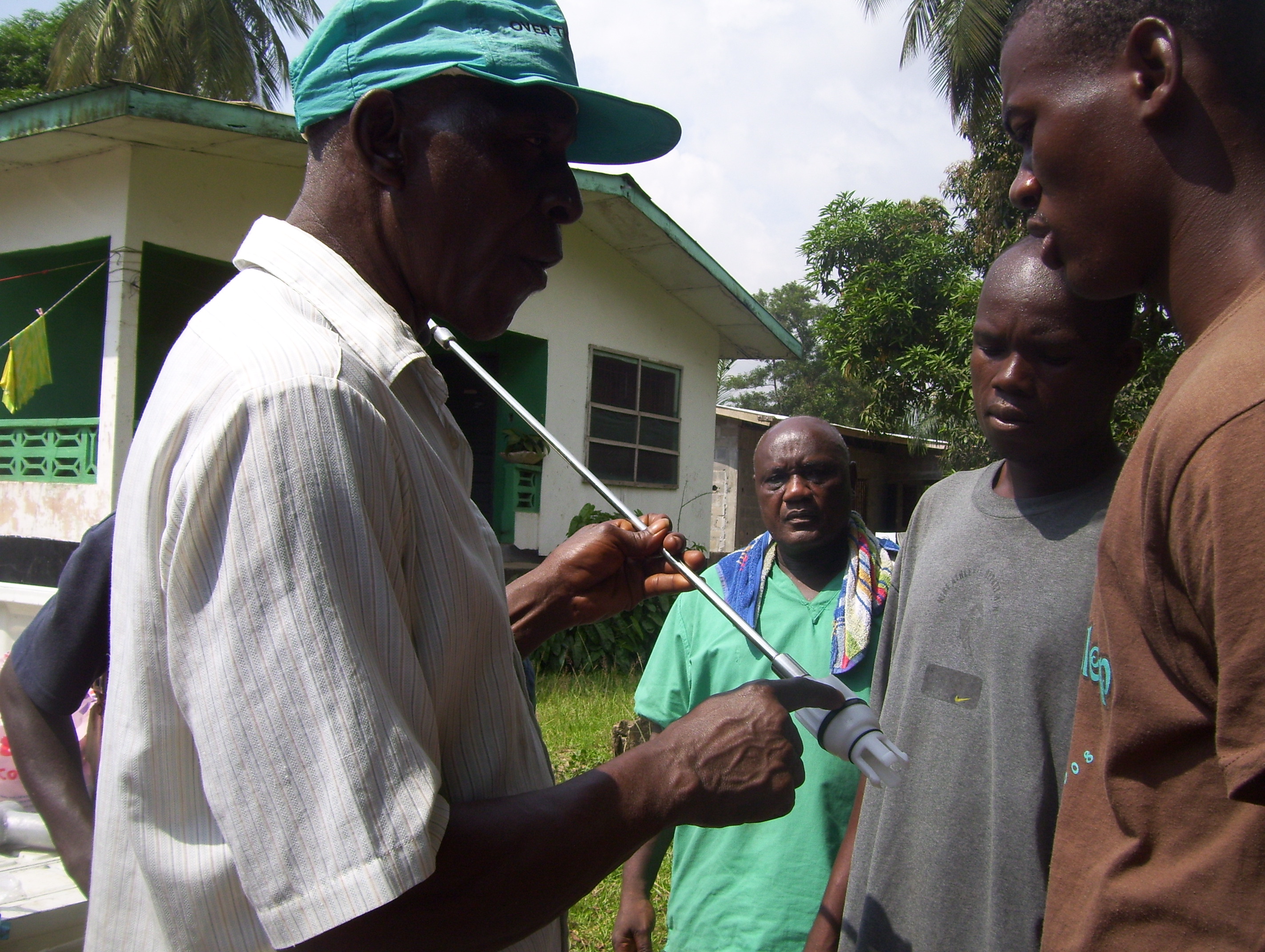 The other main innovation is an open top cylinder, allowing the pump rod to be pulled without having to lift out the heavy rising main. This enables the most commonly worn part of the pump (the leathers or pump rings) to be quickly, safely, and hygienically changed without great risk of dropping parts or tools into the well. More details on pump maintenance can be found in Section 17 of the Lifewater's Water Well Drilling Manual.

Starting in 1997, Lifewater has been training Pump Repair Technicians in every village where we drill a well. However, the response is mixed, with a few technicians stealing the tools, others moving away, and others not feeling confident or experienced enough to attempt a repair. Much work still needs to be done to make Pump Repair Technicians more effective. But the benefits are obvious: shorter pump down times, less work and expense for the Lifewater teams, and even more efficient use of Lifewater donors' support.

Pump Repair Technicians must be trained within the context of the village in which they live. Any financial or material compensation must be negotiated between them and their neighbours. Here's how we learned that lesson.

After the Liberian civil war, an aid group received substantial international funding to train demobilized ex-combatants. The decision was made to train them as Pump Repair Technicians. For weeks, they were trained on how to use tools, how wells work, and how to take apart and repair every known Afridev hand pump problem.

The funder and aid group were happy to successfully complete a major development initiative. The former fighters were happy to be transitioned into a new career. Everyone was happy -- until the last day of school when they were handed diplomas and learned there were no jobs. The surrounding villages already had their own Pump Repair Technicians and didn't need more.

Pump thefts started early the following week. Villagers across the region started waking up to find their pumps had been stolen during the night. And pumps started showing up for sale in the local market -- minus their ID number tags. Even the police approached Lifewater for a new pump after the one at the police station was stolen!

Eventually, Lifewater and other aid groups developed a metal security jacket which locks to the pump to cover all the bolts needed to take it apart. Theft has dropped dramatically and we have all learned a lot about the potential long-term consequences of short-term plans.

In the meantime, Pump Repair Technicians are still needed more than ever to help address the worldwide problem of pumps sitting broken. But training must happen not in a diploma-issuing school, but in village settings where there is a mutually agreed-upon need for a technician and a plan for him or her to be hired and paid.

Ongoing support and training, such as that gained through the "guided pump repair model," (see the "Superhero' story above) will ensure that technicians gain the experience they need to keep safe water flowing in their communities.

Since 1995, every Lifewater water project has included training of a Project Caretaker or Well Caretaker. Not all have carried on as intended, but the position helps ensure that the pump lasts longer, that the water stays safe, and that conflicts don’t escalate. 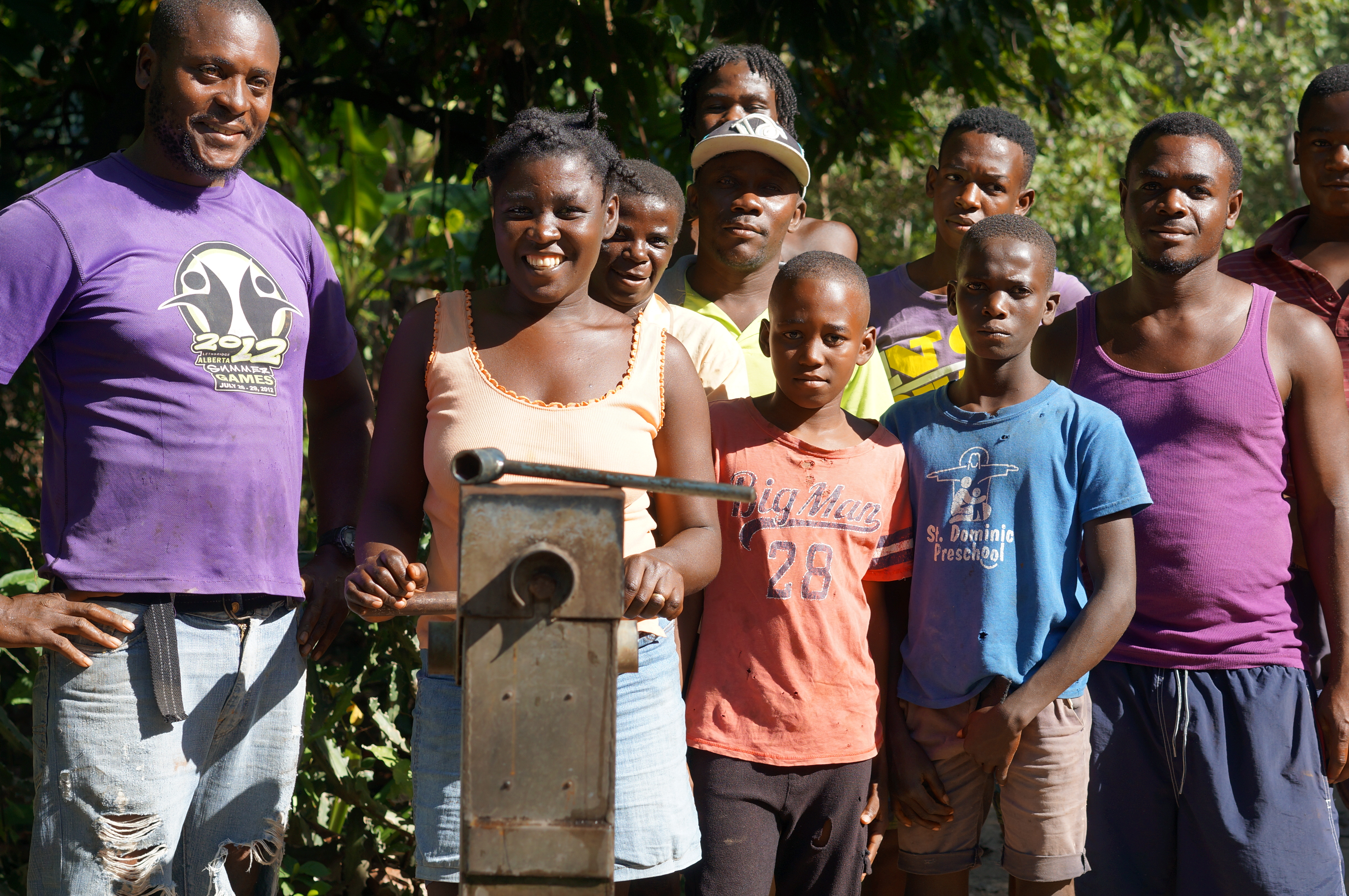 One of the key jobs of the caretaker is to monitor the pump while it is in use. By ensuring that the handle is operated full stroke, the pump cylinder will last much longer than when there is rapid, short pumping strokes which cause just a short section of the cylinder to wear.

The caretaker makes sure that people are not bathing, watering animals, doing dishes, or washing laundry at the pump. The caretaker can also make sure that children are not sticking their fingers up the spout after toileting to help rinse away residual “pupu.”

The caretaker can make sure that “social etiquette” is practiced at the well. This can include preventing young girls from being forced from their place in line, littering, toileting in the vicinity of the pump, drawing excessive amounts of water, etc.

Finally, the caretaker is the most likely person to notice that the pump is not performing as it should. Then he or she can alert the local Pump Repair Technician and/or a phone call to Lifewater to ensure the pump is repaired before it stops working, leaving the community without safe drinking water.

There was a school in Paynesville in Liberia in 2004 needing a water well. One of our conditions for providing a well by the school was that it would also provide safe water for surrounding residents. This agreement sounded fair, and everyone was happy to have water. The school janitor, Ma Sarah, was trained as the Well Caretaker and the well was successfully drilled.

Within a short time, unexpected problems began. People started littering food wrappers all over the school yard. Some people were even using a corner of the playground as a toilet! Ma Sarah was spending more and more time monitoring people as well as the pump.

As word of the good-quality water spread, the crowds of women with buckets continued to grow. At its best, the school yard became a place for loud laughter and animated social gatherings. At its worst, the yard was a place for intense arguments, threats and altercations. Teachers had trouble teaching because of the loud noise outside their classroom windows, and at recess, the children’s playground was increasingly spoiled.

It became impossible for Ma Sarah to take care of her janitorial duties, monitor the pump, and control the people. She finally exercised her Well Caretaker authority and took decisive action. The pump was locked from 9:00 a.m. to 4:00 p.m. with the exception of short openings for students during recess. Community members could draw water before and after school, but if the yard was unacceptably soiled, there would no community access to water.

Teachers could now teach. Students had cool water at recess. Ma Sarah could peacefully clean the school. And neighbourhood women began to police each other’s activities rather than be without access to the water their families needed.

This is pretty much as close as you can get to a “happily ever after” ending!